‘Fail Fast’ is BS. Do This Instead 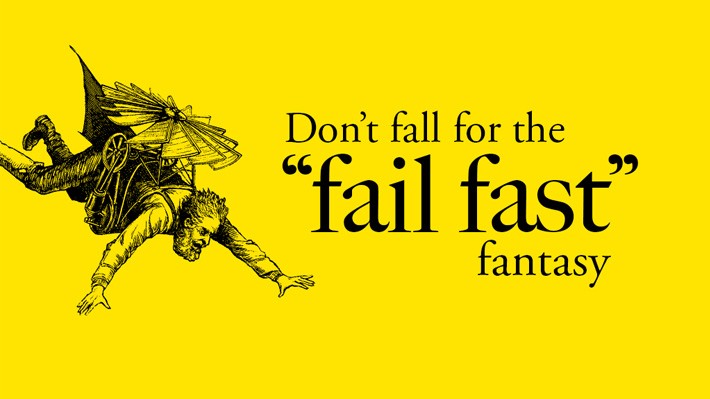 It’s an innovation mantra uttered by everyone, from an entry-level programmer at a start-up to a Fortune 100 CEO.

But let’s be honest.

NO ONE WANTS TO FAIL!

The reality is that we work in companies that reward success and relentlessly encourage us to become great at a specific skill, role, or function. As a result, our natural and rational aversion to failure is amplified, and most of us won’t even start something if there’s a chance that we won’t be great at it right away.

It’s why, despite your best efforts to encourage your team to take risks and embrace “failure,” nothing changes.

A Story of Failure?

A few weeks ago, while on vacation, I dusted off an old copy of Drawing on the Right Side of the Brain by Betty Edwards. As a kid, I was reasonably good at drawing, so I wasn’t worried about being bad, just rusty.

Then I read the first exercise: Before beginning instruction, draw each of the following:

I stared at the page. Thoughts raced through my head:

Confronted by not one but THREE things to be bad at, I was ready to quit.

Then I took a deep breath, picked up my trusty #2 pencil, and started to draw.

The results were terrible.

A Story of Success

It would be easy to look at my drawings and declare them a failure – my husband is missing his upper lip, I look like a witch straight out of Grimm’s Fairy Tales, and the thumb on my left hand is the same length as my index finger.

I did my best

I learned a lot

I did better the next time.

By these standards, my first attempts were a success**

Ask for what you want

Isn’t that what you want your team to do?

To stop analyzing and posturing and start doing.

To do their best with what they have and know now, instead of worrying about all the possibilities.

To respond to what they learned, even if it means shutting down a project, and keep growing.

Ask them to do those things.

Ask them to “Learn fast.”

Your people want to learn. They want to get smarter and do better. Encourage that.

Ask them to keep learning.

Your team will forget that their first attempt will be uncomfortable and their first result terrible. That’s how learning starts. It’s called “growing pains,” not “growing tickles,” for a reason.

Your team will want to hide their mistakes, but that doesn’t make anyone better or wiser. Sharing what they did and what they learned makes everyone better. Reward them for it.

Ask the team what’s next

It’s not enough to learn one thing quickly. You need to keep learning. Your team is in the trenches, and they know what works, what doesn’t, and why. Ask for their opinions, listen carefully, discuss, and decide together what to learn next.

You don’t want your team to fail.

You want them to succeed.

Ask them to do what’s necessary to achieve that

*Achieving perfect (or even realistic) results on my first attempt is impossible. You can’t fail at something impossible

** To be clear, I’m not making a case for “participation trophies.”  You gotta do more than just show up (or read the book). You gotta do the work. But remember, sometimes success is simply starting.