The Four Horsemen of the Innovation Apocalypse 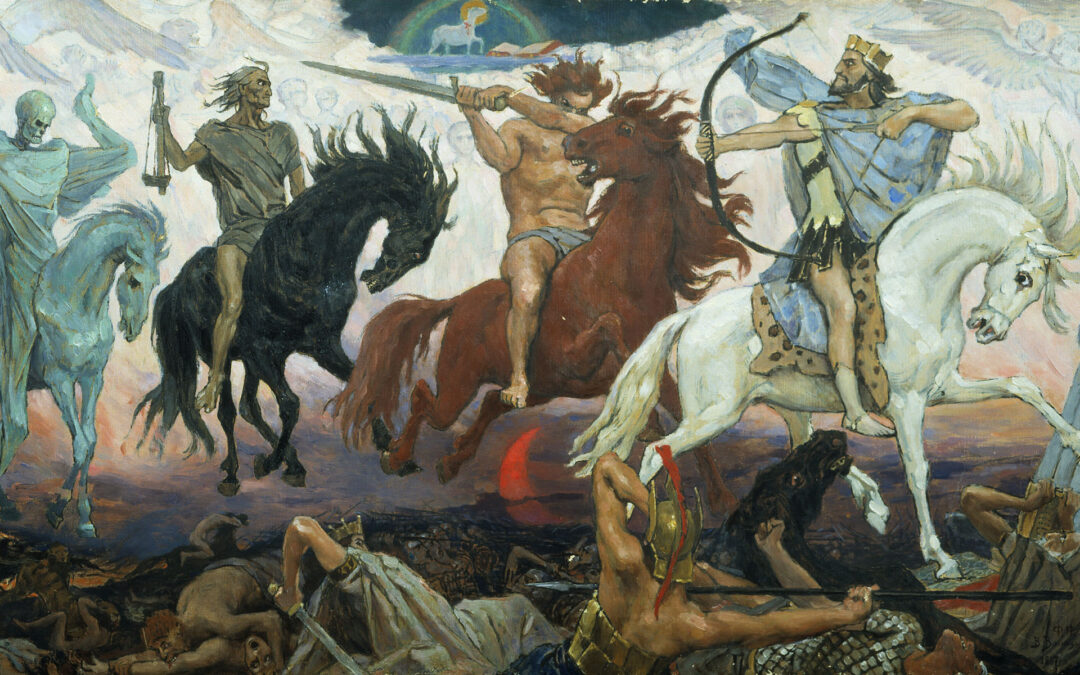 The Horsemen are drawing nearer

On leather steeds they ride

They’ve come to take your life

On through the dead of night

With The Four Horsemen ride

Or choose your fate and die

– “The Four Horsemen” by Metallica

No scene from The Bible’s description of the Apocalypse has captured the popular imagination as much as that of the Four Horsemen.  In Revelation 6, four beings are summoned, each riding out on a different colored horse – Conquest on a white horse, followed by War on a red horse, Famine on a black horse, and, finally, Death on a pale horse.

“The Four Horsemen” has been used as an analogy to describe everyone from Notre Dame football players to Supreme Court Justices, and referenced in books for everything from dealing with addiction to relationship counseling.

Like Conquest, Short Term-ism wears a crown and is hailed as a bringer of victory, prosperity, and health.  After all, the only thing better than hitting your quarterly numbers is hitting them two quarters in a row.  Then three, then four…

Short term-ism convinces you that the good times are here to stay if you just keep investing in today.  Anxious to continue reaping immediate rewards and blind to the fact that it will end someday, executives dedicate more and more financial resources to short-term initiatives, reducing and ultimately killing long term investments

The result is that an idea, business, or investment that was attractive 5 years ago needs to be 10x the size and 100x the certainty today.  As companies get bigger the size of new products, business models, and revenue streams need to get bigger to move the needle.

I spoke to a CEO recently who lamented that he regularly shuts down ideas for new products because they’re “not big enough.”  The irony, he told me, is that the new product that’s not big enough for today’s business would have doubled the size of the business 7 years ago.

But innovation often starts small, with a single spark, and needs to be incubated and nurtured over (a reasonable amount of) time.  Companies that will only invest in big innovations that produce immediate results, don’t invest in innovation.

When there’s not enough to go around, you have a famine.  It can be food and water, or money and time.  It can be real or perceived.  It is always deadly.

We live and work in environments of scarce resources.  Even the biggest companies don’t have infinite amounts of time, money, and people.  That means that $1 spent on innovation (something new that creates value) is $1 NOT spent on the certainty of today’s business.

Trade-offs are a part of life.  The problem is when trade-offs stop being seen as choices we make to achieve the best possible outcome, and start to become us-versus-them battles.

Like Revelation’s depiction of Death as empty-handed and followed by Hades, its jaws open to receive Death’s victims, Innovation’s apocalyptic Pale Horse rider neither shows nor speaks of its fear and is usually followed by HR*, its arms open to welcome innovators into new roles in the core business.

Unlike the Biblical Apocalypse, the Innovation Apocalypse can be stopped and even prevented.

To prevent the Innovation Apocalypse, embody the opposite mindsets and behaviors of the Four Horseman:

Of course, all of this is easier said than done.

The reality is that the Four Horsemen are already running rampant in most organizations.  The only way to stop them from ushering in the Apocalypse is to confront them.

It’s not easy or risk-free to challenge, however politely, a senior executives’ decisions that prioritize the short-term over the long-term, big business over small, preservation of resources over investment, and certainty over the unknown.

But if you don’t speak up, the Horsemen will ride roughshod over your business and the Innovation Apocalypse will come.

* To be very clear, I am NOT equating HR to Hades.  I love HR.  They have a very important and very difficult job, and they are woefully under-appreciated.  They also have the misfortune of being the people who show up immediately after an innovation initiate gets shut down with the task of picking up, reallocating, or separating the people left behind.  Which, unfortunately, makes them a great element for this analogy.