The IKEA Effect is Creating Zombies. Here’s How to Fight Them. 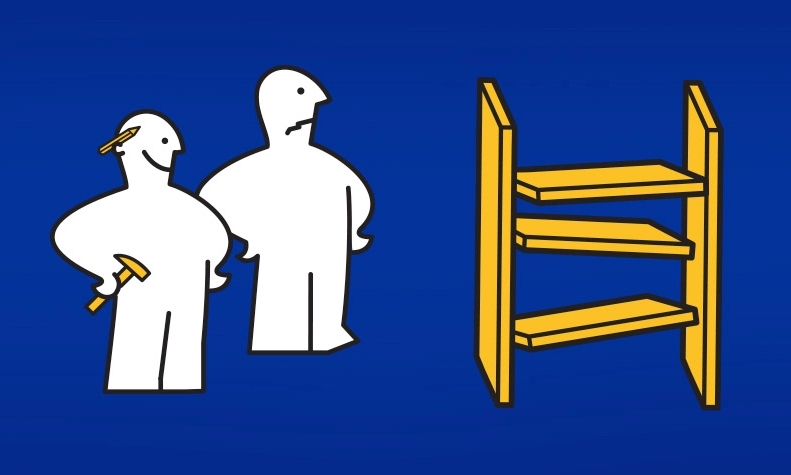 When I was a senior in college, I took a pottery class.

One of our assignments, before learning to throw on the wheel, was to create a functional piece using slabs of clay.  I designed an Alice in Wonderland-inspired vase and built something that somewhat resembled the design.

Obviously impressed by my innate talent, the instructor offered to teach me a special glazing technique that used highly toxic chemicals to create…well…I stopped listening as soon as I heard “toxic chemicals.”  It was dangerous, so I was in.

The result was a rather misshapen (not Alice in Wonderland-inspired) vase that looked like it was made out of chunks of rusted metal.

My roommate hated it.

She declared it the ugliest thing she ever saw and forbid me from placing it anywhere in the apartment where she might have the misfortune of laying eyes on it.

To this day, she swears it’s the ugliest thing she’s ever seen.

I display it proudly on the bookshelf in my office.

It would be easy to explain our different reactions to my work of art as simply the result of different aesthetic preferences.  And while there may be some truth in it, I suspect the better explanation is the IKEA Effect.

First identified and named in 2011 by professors from Harvard Business School, Yale, and Duke, the IKEA effect is a cognitive bias in which people place a disproportionately high value on products they partially create.

Think about it.  We all have that piece of furniture, art, craft project, or home improvement effort that we assembled, designed, crafted, installed, or built that we absolutely love and refuse to part with.

No one understands why we won’t let go of that broken, worn out, dust collecting, out of style, money pit but, we believe, it’s simply because they don’t understand or see what we do and that, once they do, they too will see it for the treasure it is.

The same behavior happens in innovation.  Teams invest months, even years, developing, testing, and launching new products and services, and yet, when the market doesn’t respond (i.e. there’s no demand, meaningful revenue, or potential profit), the product or service continues to be offered.

This is the IKEA Effect in action.

And the result is Zombies.

As evidence mounts that the project will not achieve market success, innovation teams invest with urgency, believing that more marketing, more sales calls, and more discounts will attract the customers that are surely out there.  When the increased investment doesn’t produce the desired results, resources are slowly “reallocated,” the project is “deprioritized,” and a skeleton crew is left to make it work.  The project is a Zombie, the living dead incarnation of an innovation project.

Given the commonality of this behavior, you might think it would be easy to spot Zombies.  You would be wrong.

While the IKEA effect is believed to contribute to both the sunk cost effect and to “not invented here” syndrome, it is a far more fundamental effect, deeply rooted in people’s emotions and identity, and likely to manifest in “logical” arguments based on carefully selected data.

This makes spotting an IKEA Effect Zombie almost as hard as killing one.

Which is why it’s important to know your Zombies:

HiPPOPs – Highest Paid Person’s Opinion Projects (HiPPOPs) are envisioned, developed, and driven by a senior executive.  When data counter to the executive’s opinion surfaces, the executive finds another piece of data to support their opinion. The project lurches on for years, fed by the executive, as people throughout the organization watch it slowly rot.

Perennial Pivoter – These projects are always just one pivot away from success.  Created by a team of eternal optimists, there’s no such thing as failure, there’s only learning what not to do and what to try next.

Windfall Walker – When you hear “It’s a small investment and the upside could be huge,” a Walker is not far away.  Often the brainchild of a single individual, the promise of these projects is far greater than their return.  But they live on because everyone silently agrees that it’s easier to live with the Zombie than kill it.

Hope Hunter – Perhaps the most dangerous and cruel of all the Zombies, these projects always offer a glimmer of hope that the hockey stick of success is just a quarter, a customer, or a PR moment away. Convinced that staying the course and investing just one more dollar, month, or customer call will bring the project back to life.

How to Deal with IKEA Effect Zombies

Just like all other adventure stories, the source of the problem is also the solution.  In this case, IKEA created the effect and their stores point to the solutions.

To Kill a Zombie, Stand Your Ground.

Zombies appear when you lose focus on creating and delivering something desirable (solves a customer’s problem), feasible (can be created), and attractive (meets or exceeds key strategic and financial targets).

Because Zombies are a sign that you’re lost, you need to do the same thing you do when you get lost in IKEA – stop, pull out the map, and re-orient yourself.

Go back to your original criteria for pursuing the project.  Does the project still meet the thresholds or has something, like the company’s strategy or the project’s results, changed? How does the change impact the project’s desirability, feasibility, and attractiveness?  What is the right thing to do for the business based on these changes?

Try to be objective as you re-orient yourself and avoid the urge to blame others or beat yourself up.  What matters most isn’t how you got here, it’s where you go from here.

When you start an innovation project, set a clear, objective, and measurable goal at the beginning.  That’s your meatball.  At every project milestone, revisit the goal.  Is it still a desirable goal or has something in the business fundamentally shifted, requiring the goal to change?  Is it still reasonable to believe that the project will achieve that goal, or have you learned something that makes the goal improbably or even impossible?

Staying focused on the goal and objectively evaluating your odds of achieving it makes it easier to let kill a project that can’t get you to where you need to go.

Follow the Arrows.  IKEA Showroom maps are often as helpful as the assembly instructions that come with their furniture.  Not at all.  That’s why there are arrows on the floor and signs hanging from the ceiling to guide you through the shopping experience and, ultimately, to the meatballs.

A project process with clear governance is the innovation equivalent of floor arrows and ceiling signs.  Before starting an innovation project, identify the activities required, thresholds that must be met for additional resources, roles and responsibilities of team members, and decision-making criteria.

As you do the work of innovation, you’ll refine the process and governance.  By your third project, it should be 80% set and by your fifth, it should be 90% set (you never want it to be 100% because innovation does need a bit of flexibility).

Creating and following a standard process and objective governance model helps to remove the emotion that drives the IKEA effect and creates Zombies.

By acknowledging the Innovation Effect in your organization, identifying and killing the Zombies it creates and putting the goals, processes, and governance in place to prevent a Zombie recurrence you’re on your way to more efficient, effective, and successful innovation efforts.

I recommend celebrating with meatballs (and lingonberry jam)!