The Intrapreneur, Confessions of a Corporate Insurgent 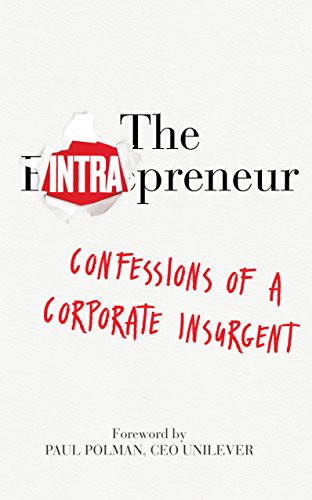 When I first heard about this book, a first-person account of innovating within a large corporation, and that it was set in a mental hospital, I thought “Yup, sounds about right.”

The craziest, most inspiring, and strongest people I have ever known are intrapreneurs. Because you have to be crazy to believe that you can change a massive organization, you have to inspire others to follow you into the fight, and you have to be strong to withstand near-constant defeat and, if and when success arrives, shine the spotlight no on yourself but on all the people who fought alongside you.

Gib’s story is similar to those of other Intrapreneurs.

He was in his early-30s and only a few years into his tenure at Accenture when he proposed the creation of Accenture Development Partnerships based on his experience working with Voluntary Service Overseas (VSO), a program in which business professionals would be loaned out by their employers (who would hold their jobs for 6–12 months) to work as volunteers in developing countries. Corporate social Responsibility (CSR) was all the rage at the time and, Gib reasoned, Accenture was well positioned to replicate VSO’s model given its global staff of bright young consultants and list of clients eager to appear to do good in the world.

The next 15 years were a roller-coaster, one familiar to anyone who has tried to innovate in a corporate environment. The ups of getting support, seeing things work, and watching change unfold. The downs of losing champions, justifying your existence, and fighting to maintain your meager resources despite phenomenal results. The ride ended not with a return to the station (aka a quiet role back in the core business) but with a four-day stay at a psychiatric hospital when his friends and family became concerned about his manic energy and fixation on creating a “Fourth Sector” that would combine the best of the public (government), private (business), and third (NGO) sectors to serve humanity’s greatest needs.

Even though his story is one I lived early in my career, when I was an intrapreneur at P&G, and one that, as a corporate innovation consultant, I’ve seen others live, there were three passages in the book that I found so profoundly important and true that they simply must be shared

Innovation, and lack thereof, is a leadership problem.

“At its core, the problem is about leadership. Too many people believe leadership comes as the result of a promotion — or from a fancy job title on a business card. Not at all. Leadership is more of a mindset than a skillset. Leaders can emerge at all levels of an organisation, even low down.”

Corporate antibodies are the #1 killer of innovation

(Reflecting on an unsupportive executive):

“(Executive) was old school leadership. He’d climbed the ladder in the Business 1.0 world. He was programmed to have a single-minded focus on the business fundamentals — an entire career spent cutting cost, growing revenues, driving efficiency. What’s the problem with that? You might ask. It certainly worked for him, and he’d reached the heady heights of the senior management ranks.”

(When asked it this executive was the main problem):

“Yes and no. We also got confronted by legal, tax, compliance, security, you name it. My team bore the brunt of their endless checks, audits, and bureaucracy. I remember having a very strong feeling that we were suffering from a thousand cuts and I was powerless to do anything. Good people were leaving our team out of sheer frustration or pressure.”

Intrapreneurs are the heroes this world needs

“Intrapreneurs are not content with business as usual and aspire to drive change bottom up and inside out of their own organisations. These are the people who won’t change companies when they get frustrated in their jobs or crave more purpose from their careers. Instead, they stay put and change the companies they’re in….

No one ever said it would be easy. Of course it’s risky for your career. Sure, you’ll be laughed at. Told you’re crazy. Overlooked for promotion. Yes, you might even lose your job. I often think of the reactions that a Picasso or a Jackson Pollock must have had when they shared their first works of art. Or how silly that first person trying to start a Mexican wave must have felt when they stood up screaming with their hands in the air, only to find they were the only one. My point is that you may have to be prepared to appear crazy to others if you’re going to be successful in driving change in any organisation.”

The Intrapreneur is a good read (though it does get a bit self-congratulatory in parts). Reassuring to other intrapreneurs that they are not alone. Perhaps eye-opening to executives who wonder why their organizations aren’t more innovative. Definitely the story of someone on the edge of sanity. Because all intrapreneurs are.