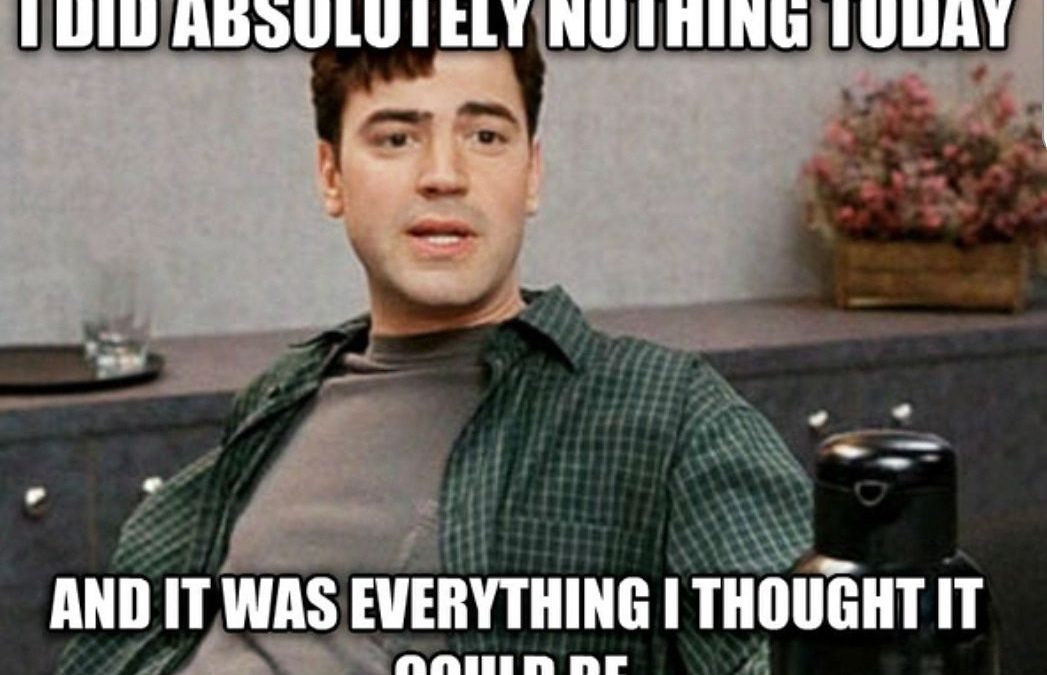 “What do you plan to do on vacation?” my friend asked.

We live in a world that confuses activity with achievement so I should not have been surprised that the idea of deliberately doing nothing stunned my friend into silence.

After all, when people say, “I wish I had nothing to do” they usually mean “I wish I could choose what I do with my time.” And, when they do have the opportunity to choose, very few choose to do nothing.

Why does the idea of doing nothing make us so uncomfortable?

To put it bluntly, busy-ness is a status symbol.

In their paper, “Conspicuous Consumption of Time: When Busyness and Lack of Leisure Time Become a Status Symbol,” professors Silvia Bellezza (Columbia Business School), Neeru Paharia (Georgetown University), and Anat Keinan (Harvard University), wrote that people’s desire to be perceived as time-starved is

“driven by the perceptions that a busy person possesses desired human capital characteristics (competence, ambition) and is scarce and in demand on the job market.”

We didn’t always believe this.

For most of human history, we’ve had a pretty balanced view of the need for both work and leisure. Aristotle argued that virtue was obtainable through contemplation, not through endless activity. Most major religions call for a day of rest and reflection. Even 19th-century moral debates, as recorded by historian EO Thompson, recognized the value of hard work AND the importance of rest.

While it’s easy to say that we have to work more because of the demands of our jobs, the data says otherwise. In fact, according to a working paper by Jonathan Gershuny, a time-expert based on the UK, actual time spent at work has not increased since the 1960s.

The actual reason may be that we want to work more. According to economist Robert Frank, those who identify as workaholics believe that:

“building wealth…is a creative process, and the closest thing they have to fun.”

We choose to spend time working because Work — “the job itself, the psychic benefits of accumulating money, the pursuit of status, and the ability to afford the many expensive enrichments of an upper-class lifestyle” according to an article in The Atlantic — is what we find most fulfilling.

We tend to equate doing nothing with laziness, apathy, a poor work ethic, and a host of other personality flaws and social ills. But what if that’s not true.

What if, in the process of doing nothing, we are as productive as when we do something?

Science is increasingly showing this to be the case.

Multiple fMRI studies have revealed the existence of the default mode network (DMN), a large-scale brain network that is most active when we’re day-dreaming. Researchers at the University of Southern California argue that

“downtime is, in fact, essential to mental processes that affirm our identities, develop our understanding of human behavior and instill an internal code of ethics — processes that depend on the DMN.”

The results of harnessing the power of your DMN are immense:

More creativity. The research discussed in Scientific American suggests that DMN is more active in creative people. For example, according to Psychology Today:

More productivity. According to an essay in The New York Times, “Idleness is not just a vacation, an indulgence or a vice; it is as indispensable to the brain as vitamin D is to the body, and deprived of it we suffer a mental affliction as disfiguring as rickets. The space and quiet that idleness provides is a necessary condition for standing back from life and seeing it whole, for making unexpected connections and waiting for the wild summer lightning strikes of inspiration — it is, paradoxically, necessary to getting any work done.”

Less burnout. Regardless of how many hours you work, consider this: researchers have found that it takes 25 minutes to recover from a phone call or an e-mail. On average, we are interrupted every 11 minutes which means that we can never catch up, we’re always behind.

That feeling of always being behind leads to burn-out which the World Health Organization officially recognized as a medical condition defined as a “syndrome conceptualized as resulting from chronic workplace stress that has not been successfully managed” and manifests with the following symptoms:

Doing nothing, quieting our minds and not focusing on any particular task, can actually help reset our bodies systems, quieting the release of stress chemicals, slowing our heart rates, and improving our mental and physical energy

Better health. Multiple studies indicate that idleness “produces many health benefits including, but not limited to, reduced heart rate, better digestion, improvements in mood, and a boost in overall emotional well-being — which, of course, affects everything on a biochemical and physiological level, thereby serving as a major deciding factor on whether or not we fall ill, and/or remain ill. Mental downtime also replenishes glucose and oxygen levels in the brain, and allows our brains to process and file things, which leaves us feeling more rested and clear-headed, promotes a stronger sense of self-confidence, and…more willing to we trust change.”

Fine, you convinced me. How can I do nothing?

There are the usual suspects — vacations, meditation, and physical exercise — but, if you’re anything like me, the thought of even finding 5 minutes to listen to a meditation app is so overwhelming that I never even start.

An easier place to start, in my experience, is in intentionally working nothing into the moments that are already “free.” Here are three of my favorite ways to work a bit of nothing into my day.

Make the Snooze button work for you. When my alarm goes off, I instinctively hit the Snooze button because, I claim, it is my first and possibly only victory of the day. It’s also a great way to get 9 minutes of thoughtful quiet nothingness in which I can take a few deep breaths, scan my body for any aches and pains, and make sure that I’m calm and my mind is quiet when I get out of bed.

Stare out the window. I always place my computer next to a window so that I can stare out the window for a few minutes throughout the day and people think I’m thinking deep thoughts. Which I am. Subconsciously. Lest anyone accuse me of being lazy or unproductive while I watch the clouds roll by, I simply point them to research that shows “that individuals who took five to ten minute breaks from work to do nothing a few times a day displayed an approximately 50% increase in their ability to think clearly and creatively, thus rendering their work far more productive.

Bring the beach to you. Research from a variety of places, from the UK Census to The Journal of Coastal Zone Management, indicate that our brains and bodies benefit from time at the beach. But, if you can’t go to the beach, there are lots of ways to bring the beach to you. Perhaps the simplest is to bring more blue into your environment. Most people associate blue with feelings of calm and peace and a study published in the American Association for the Advancement of Science found that the color blue can boost creativity. Even putting a picture of a beach (or your own personal happy place) on your desk or computer screen can trigger your brain to slow down, relax, and possibly trigger your DMN.

With so many benefits, isn’t it time you started doing more nothing?